If the Jupiter were a star, would a night on Earth be possible?

I should be working now but as the master of procrastination, I found myself in the middle of a discussion about brown dwarfs (I mean, those failed stars, just to be clear). So the question was:

If the Jupiter's mass would be increased just enough so that it would become a star, how bright it would be for an observer on Earth?

Jupiter is obviously a planet, but if you'd increase its mass about 13 times, it could, most probably, become a brown dwarf. That is, it would be a substellar object with an ongoing fusion in its core, but instead of hydrogen, it would use deuterium as a fuel. And if you'd incease its mass up to about 0.083 solar masses, the hydrogen fusion would kick in and you'd have yourself a new star. Such are the basics.

According to the stellar models presented neatly in Eric Mamajek's table, a star with 0.08 solar masses have an absolute magnitude of 17.8 in the visual band (the less the magnitude the brighter the object). The Sun have an absolute magnitude of 4.8, so for an observer on Earth the newborn Star-Jupiter would be exactly 13 magnitudes dimmer from it, IF it would be located at the same distance as the Sun. The problem is the Jupiter is orbiting the Sun, and would be therefore at different distances from the Earth all the time. The Sun, for an observer on Earth, have a magnitude about -27. The Full Moon can reach magnitude -11. What would be the magnitude of the Star-Jupiter on its closest to us? 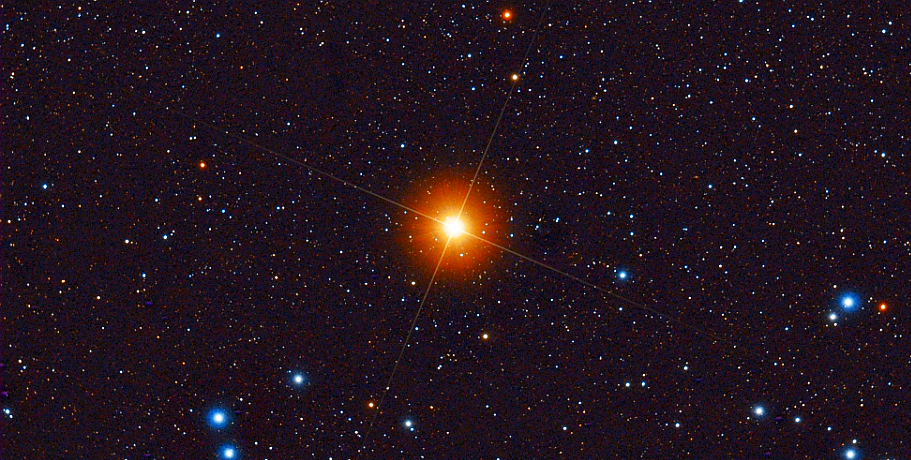 The closest distance the Jupiter gets to Earth is 4.3 Astronomical Units (AU = mean distance between the Sun and Earth). One can expect that such a more distant object would shine even less that what we calculated above. And that's true. Observed flux falls with a square of a distance. In the same time, our eyes gather light in a logarithimic scale. All this is combined in the modified Pogson's definition of the magnitude:

... Where D is distance in relative units. Long story short, the dimming from the distance would yeld another 3.2 magnitudes. All above combined ends with magnitude little less than -11 during the opposition. That means,
the star on the lower mass limit replacing Jupiter would be as bright the Full Moon

But wait, that's not all!

The object would be as bright as the Moon, but its size in the sky would be just as small as Jupiter's right now. It's not a mistake. A star with a 0.08 solar masses have a diameter only about 10% larger than Jupiter.

It would end with a pure-red dot in the sky concentrating all the Moon's brightness on its very small, invisible-to-the-naked-eye surface area. It would appear as extremely bright! To put it into perspective, Venus can reach magnitude -5 on our sky. Jupiter, magnitude about -4. Sirius have an observed visual magnitude of about -1.5. This Star-Jupiter dot would have -11 in its brithtest moments, that is about 250x more than Venus can. If you ever observed flares from the Iridium satellites, their maximum brighness could reach magnitude -8, which is still 16x less that the Star-Jupiter could have.

To answer the question I put in the title of this post, yes, Earth would still experience nights. Nights with two sources of light and two shadows for everyone on our planet. And during the New Moon the night would be tinted red. Imagine how that would influence the development of the civilizations and cultures!

BTW, I was going to nickname the Star-Jupiter somehow, but all I got was the shortener, St-upiter, so I gave up.

All right, that's enough. I really need to go back to work now ;)
Cheers!

You can login with your Hive account using secure Hivesigner and interact with this blog. You would be able to comment and vote on this article and other comments.